‘Back To The Source’ is a multi-award winning music road-trip documentary film by Robin Phillips, retracing the path of jazz and blues in America, from Chicago to New Orleans on a Harley Davidson to connect with the soul of his art form. 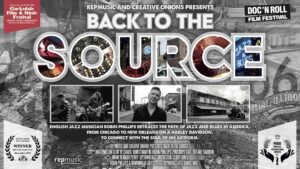 The Gonville Hotel is offering a dinner ticket which will be served during the documentary screening.The screening will then be followed by a one-set performance by Robin’s New Orleans-flavoured speakeasy swing quartet Pinstripe Rèduit, including original music inspired by the trip featured in the film.

The film won ‘Best Documentary’ and ‘Best Feature Film’ at the Kings Cross Film Awards in December 2021, won the PARAI Musical International Award 2021, and was an ‘Official Selection’ in the Best Documentary category at the New Creators Film Awards (Dec 2021).

This is the first public screening in the UK following the World premiere at the Clarksdale Film Festival in Mississippi.